Herriman City is working with a development partner to create an auto mall—a series of adjacent motor vehicle dealerships—along Mountain View Corridor between Midas Creek and Herriman Boulevard (12600 South). The project is years in the making and is expected to generate a much-needed increase in sales tax revenue for the City. Other commercial properties in and around the auto mall area would help support the overall development.

Why an Auto Mall? 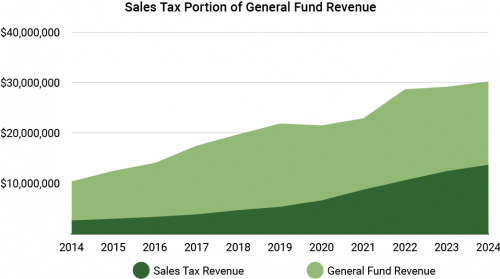 The City consistently works to cultivate a strong economic foundation. Sales tax generated by commercial activity brings revenue to the City to offset the costs of providing services as the community grows. Sales tax is traditionally a major source of revenue for cities. Herriman City’s sales tax base has been growing significantly in recent years as new commercial areas develop throughout the city. Herriman has experienced explosive residential growth over the last decade, which aids in influencing the development of commercial centers.

Herriman’s location in the Salt Lake Valley poses a challenge from an economic standpoint. Most commercial centers depend largely on heavy traffic passing through. Because Herriman sits at the corner of the valley, there aren’t population centers to the south or west of the city. While not as well-traveled as I-15 and Bangerter Highway, Mountain View Corridor presents some strong commercial opportunities for Herriman. It is anticipated that the freeway portion of Mountain View Corridor through Herriman will begin construction in 2029.

Additionally, Herriman City owns or has owned a significant portion of property in this area, giving the City Council a unique opportunity for control over what comes in. Most of the time, the City functions only as the governing municipality—with some limited control—when property is developed. However, regarding the auto mall and some surrounding areas, the City is also a property owner, with greater control over the development.

In addition to location, a further challenge to Herriman’s economic standing is that some major regional commercial centers already exist nearby, such as Mountain View Village, The District, and Jordan Landing. However, the City identified years ago that automotive dealerships are lacking on the western side of the valley, and Mountain View Corridor presents a good opportunity for dealership locations. An economic study finalized in 2018 confirmed the viability of an auto mall at this location.

The City has been actively pursuing this opportunity for several years, working with various stakeholders, and creating the Auto Mall Special District zone in December 2018. The zone was then applied it to the project area to ensure no other types of development can occur in that location.

In addition to automotive dealerships, there are some other commercial areas (such as restaurants, services, and stores) located in and near the auto mall project area. Some are included as part of the project, while others are adjacent to—but separate from—the project (such as Garage Grill and the proposed Game Pointe area).

Herriman City and a development group known as Herriman 73 Partners are working together on this project. Much of the land is owned by either the City or the developer. The developer is under contract to eventually purchase all the property in the auto mall project area. There is also another property owner, Properties of Greatness, who will be actively working to develop a motor vehicle dealership on the property.

What is an MDA?

A master development agreement (MDA) is a contract between a city and a developer/property owner to govern what is allowed to be built within the property. It is a tool sometimes used to negotiate finer details or broader visions than can be accomplished with a city’s standard zoning rules and oversight. Sometimes, timeline and performance requirements can be put in the agreement. When agreed upon by the City, MDAs can override certain zoning requirements.

Developer and City working toward MDA

The auto mall developer and the City Council have been discussing an MDA or MDAs for the auto mall in public and working meetings. The project is complex and covers multiple areas (see map below) and an MDA will cover each of the four areas. Three were approved on October 12, 2022, and the other (North of Miller Crossing) has been tabled until January 2023. 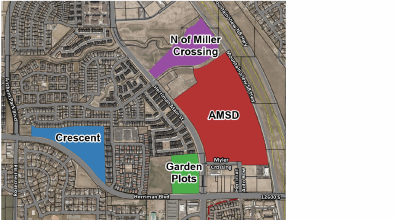 Four Main Areas and Their Zones

The auto mall project has evolved in discussions over several years and now includes four main areas. These areas are identified simply by names that have been used in conversations during meetings. Additional land uses proposed that aren’t allowed in each area’s base zone would need to be made allowable through an MDA.

The main roadway through the project will be Auto Row Drive, which will run north/south parallel to Main Street. Miller Crossing will be extended from Main Street to Mountain View Corridor, and other supporting streets will be built.

Auto mall PID property taxes will not be assessed to Herriman residents—only to the commercial property owners in the PID area of the auto mall. The City Council must approve the PID’s origination/governing documents, but the PID funds are otherwise kept complete separate from the City’s public finances. The City is not responsible to pay back the PID, even if the project fails. 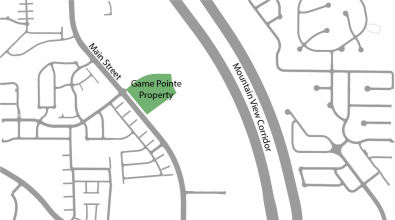 The Game Pointe property is adjacent to the auto mall area but is a separate project with different stakeholders. Herriman City sold six acres of land to Game Pointe in 2019 with a two-year buyback option if the project didn’t materialize. The COVID-19 pandemic came in the following year and the project stalled. The City granted extensions in consideration of the pandemic. Updated plans were presented to the Council in the October 12, 2022 meeting, which the Council and developer will collaborate on in coming weeks and months. The developer is obligated by contract to make progress by certain deadlines in early 2023; otherwise, the City may buy the property back at the original sale price.

Adjacent to the southern edge of the auto mall is a commercial area that is home to several new businesses, including Garage Grill. This development and the auto mall will undoubtedly support each other but are separate projects.

A significant element at play in the auto mall project is the existence of contaminated soils in some of the project area. Contamination has resulted from decades of mining operations, including those predating the nearby Kennecott Bingham Canyon Mine. Studies completed by the United States Environmental Protection Agency (EPA) in the early 2000s provide regulation guidance for development on areas where contaminated soil is present. Portions of the auto mall are located within the area designated as the Kennecott South Zone, Operable Unit 3 (OU-3). The EPA has granted Herriman Institutional Controls in the OU-3, which designates Herriman City as the one who has jurisdictional control over soil remediation for new development. All development must follow the procedures as outlined in the Development of Contaminated Properties Procedures Manual located online at this link.  As part of the development agreements, the developer will be required to conform with all local, state, and federal regulations in order to develop property where contaminated soil exists.