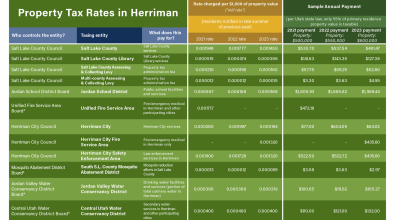 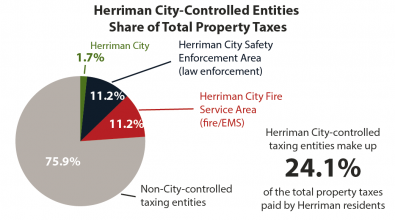 Who/what do I pay property taxes to?

Some may wonder if their property taxes just go to their local city and nowhere else. The answer is no. In Herriman, the general City tax itself represents only a small portion—about 1.7% this year—of the total amount paid. Law enforcement and fire service taxes each add an additional 11.2%. So, all three City-controlled entities add up to 24.1% of the total property tax paid. So where does the rest of it go?

To the right is a graphic that shows what entities charge property taxes, who controls the entities, what the funds pay for, and a sample annual payment. Click on it for a larger view. 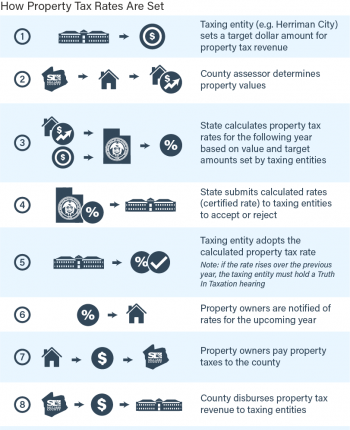 How are property tax rates set in Utah?

Once the final rate has been approved, property taxes will be paid during the following calendar year. For efficiency, taxes are paid to one central entity, the county. The county then disburses the tax revenue to the various taxing authorities throughout the year based on their rates. Those taxing entities and their governing boards may then expend the money based on their approved budgets.

What is the Herriman City Fire Service Area (HCFSA) and why is it going up 100%?

Residents will see a notice for an increase from 0% to 100% this coming year for the HCFSA; however, that simply shows a change of which entity collects fire service taxes. You may remember a notice in 2021 when fire service taxes were temporarily absorbed into the general City tax. This year’s change is the last stage of the transition from the Unified Fire Service Area (UFSA) to the HCFSA.

2021 and before
Until 2021 (publicly noticed in summer/fall 2020), fire service taxes from Herriman residents went to the multi-city Unified Fire Service Area (UFSA). When the City withdrew from the UFSA taxing entity, a one-year transition period required fire service taxes to temporarily go to the general Herriman City tax. Those funds remained separate from the rest of the City’s funds and have been reserved for fire services.
Herriman City's fire services are provided by the Unified Fire Authority through a contracted service. The UFA (fire department) is separate from the UFSA (the taxing entity). As a participating city, Herriman residents paid the fire service portion of their property taxes to the UFSA until the City withdrew. In 2022 (publicly noticed in summer/fall 2021), the City paid for UFA's services through the temporarily-combined general City tax. Starting in 2023, UFA services will be paid for through the HCFSA.
2022: The gap between the UFSA and HCFSA
Herriman City now has its own direct taxing entity for fire services called the Herriman City Fire Service Area (HCFSA). However, for the year in between the UFSA and HCFSA (2022—publicly noticed in summer/fall 2021), the City still needed to pay for its fire services. To do so, the City raised its portion of property taxes by the exact same rate that the UFSA charged, and the UFSA portion decreased to zero.
2023: The new HCFSA
In summer/fall 2022, residents will see on their 2023 property tax notices—now that the HCFSA is up and running—that fire service taxes will go to the HCFSA. Thus, the HCFSA tax rate is raising from 0% to 100%, and the general City taxes are likewise decreased to the previous amount. The overall amount that residents have paid/will pay for these city, law enforcement, and fire services remains the same.
Why did the City leave the UFSA and create a standalone fire service area?
The separation, which occured effective January 1, 2021, was based in the City wishing to have more control over local funds. Under the multi-city UFSA taxing entity, the City didn't have the ultimate say where the tax dollars went because the funds are controlled by the UFSA board. Working together with the UFSA, the City learned that Herriman residents paid more in property taxes to the UFSA than the value the City was receiving in fire/emergency medical services. The City Council voted to separate from the UFSA and keep Herriman tax dollars in Herriman with the new HCFSA.
If you have questions regarding these changes, please reach out to the Finance Department at finance@herriman.org. 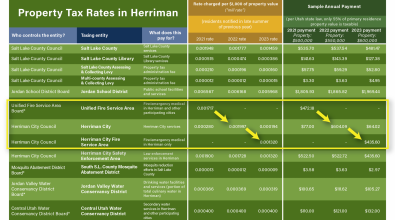 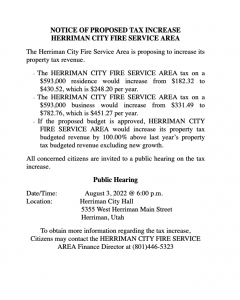 The UFSA/HCFSA transition makes sense, but why does the notice show that we’ve paid to the HCFSA before, and that rate is now up 136%?

Despite this being the first year of the HCFSA’s existence, someone reading the mailed notice might infer that taxes have been paid before to the HCFSA. This isn’t the case, as fire service taxes were previously paid to the general Herriman City tax (for one year: 2021-2022).

The HCFSA’s target budgeted property tax revenue for the upcoming year is $7,500,000. This is the same amount that has been budgeted in previous years with the Unified Fire Service Area and temporarily with the general City tax. However, due to a difference in how the State Tax Commission interprets* a portion of State Code, the State’s certified rate** for the HCFSA was only about half of what is needed to reach that amount, and half of what has typically been paid by Herriman residents in previous years. Fire services cannot be paid for with half of the needed funds, so the HCFSA is proposing to meet the full amount that has been budgeted. Thus, in the State’s view, the HCFSA is proposing an increase because it is proposing to go over the State-generated certified rate.

* State law §59-2-924.2(6)(e) requires the certified rate to be one-half of the budgeted target revenue if the fire district is being annexed. The City is not annexing the fire district, but is beginning a new one, replacing a previous one with another.

** For information about certified rates, see section “How are Property Tax Rates Set in Utah?” above