Are you looking for ways to increase your knowledge of local government operations? Government can seem complex sometimes. How do things work? How are the City Council and staff structured? How do businesses come in? Each month, we will publish bite-size informational pieces to help you understand how your government operates.
Certain topic you would like to see covered in these pieces? Email communications@herriman.org. Just note Gov 101 in the subject line and then list your interests in the body.

The 45-day state legislative session occurs each year starting in January. Hundreds of bills that have been worked on throughout the year are proposed, discussed, negotiated, and voted on at the state capitol. Your City Council and staff members, led by Government Affairs, work with residents and legislators all year long to make sure Herriman's voice is heard at the state level. During the session, we track dozens of bills that affect our priorities and work with the key decision makers. 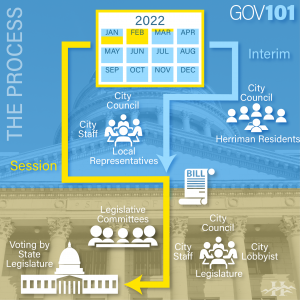 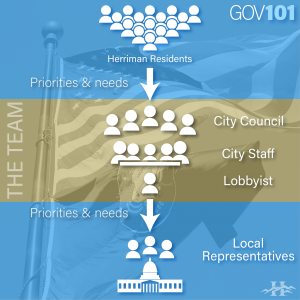 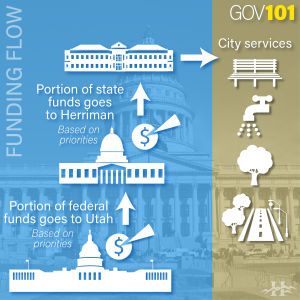 In Herriman, we have a council-manager form of government. This is the most popular structure of government in the United States among municipalities with populations of 2,500 or more. It is one of several ways in which U.S. municipalities and counties can organize.

Under this form, residents elect a governing body consisting of City Councilmembers and a Mayor. The position of Mayor in Herriman is an equal part of the five-member Council. The Council works together as the governing body and is responsible for legislative functions such as establishing policy, passing local ordinances, voting appropriations, and developing an overall vision — similar to a corporate board of directors.

The governing body appoints a City Manager to implement those policies, oversee the local government's day-to-day operations, and advise the Council. The manager position is similar to that of a corporate chief executive officer (CEO), providing professional management of the City's directors and staff. 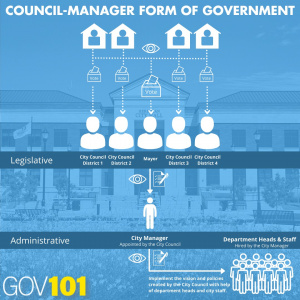 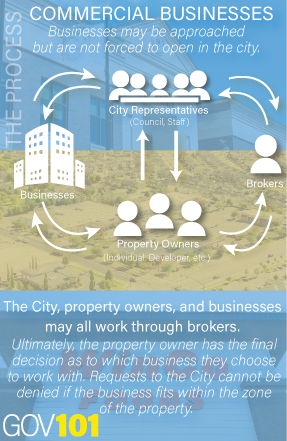 Bringing businesses to Herriman is like a dance, it takes two to tango...but in this case, it may take up to four partners. As the City representatives, brokers, property owners, and businesses work through the intricate "dance moves" each has their role in the process eventually resulting in you having places to shop and dine and the City having an expanded sales tax revenue base.

And sometimes, just when you think all the dance moves have been pulled off flawlessly, the property owner ultimately has the final say in which business they choose to work with. With the help of both the land-use zoning table and the zoning map, approved by the City Council and a part of the general plan, landowners may determine what types of businesses are approved to be built on their land.

To view the land-use table, visit item 10-16-1 at Herriman.municipalcodeonline.com/. 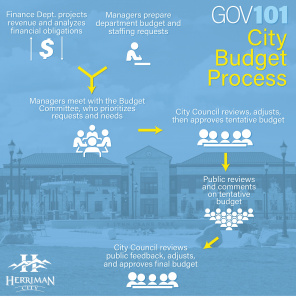 Each year, the City's staff and the City Council work to create a budget through the process outlined in the graphic below.

The City Council recently approved the tentative budget as a proposal to you, the residents. There will be a public hearing at their next meeting on Wednesday, May 25th. This will be your opportunity to provide feedback before it is approved in June.

Have questions on how everything works and fits together? You can contact the Finance Department by emailing finance@herriman.org.

It can get confusing at times to remember which services the City handles and what responsibilities are taken care of by other organizations. Here's a breakdown of these services and who Herriman residents pay for what: