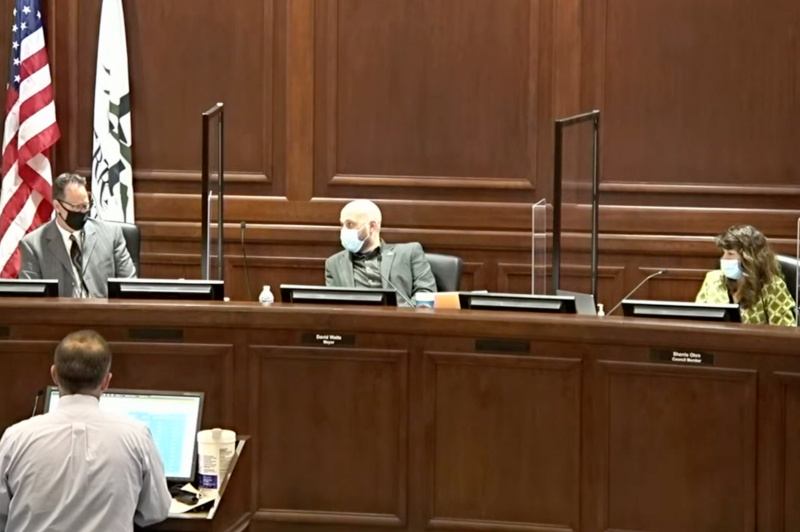 4-0 approving the consent agenda, which includes the following:

One of the results of the future Olympia Hills development in Salt Lake County (outside of—but adjacent to—Herriman City) will undoubtedly be heavily increased traffic and the accompanying costs of servicing and maintaining those most impacted roads. As one angle to help somewhat resolve concerns, the City Council is considering the option of transferring jurisdiction of 12600 South from Herriman City to the Utah Department of Transportation. This would both significantly reduce costs placed on Herriman residents but eliminate virtually all of the City's control over the road. The Council is generally supportive of initiating conversations with UDOT regarding the potential transfer of the road, but isn’t at a point to make any final decision yet.

The City Attorney gave an outline of the statutory process for annexation of unincorporated land into a city. Notably, cities cannot start an annexation process, but rather the landowner must approach the city. Then, cities have the option to accept or deny the annexation proposal. After a period of certification and public notification, directly affected landowners may protest, depending on where they live. If no official protests are filed, a public hearing is held. The city can approve or deny the application. If approved, the Lieutenant Governor is notified, who will then certify the boundary change if all procedures have properly been followed.

State Representative Candice Pierucci gave a brief summary of the extremely busy state legislative session. She mentioned a lot of wins for the Herriman and southwestern Salt Lake County area, especially in transportation funding. 13400 South is part of a major funding package, as well as U-111.

A City staff engineer gave a quarterly report for the work of the Traffic Committee, which included fielding concerns from residents all over the city and helping to mitigate those concerns through enforcement, education, and the addition of signs.

The Engineering Department has been working on updating the City's engineering Standards and Specifications. Staff members distributed the draft update to the Council a few weeks ago, and in this meeting, updated the Council on recent feedback, including from the Unified Fire Authority. Comments tonight from the Council included ensuring public safety, efficiency, fairness, and property rights over various aspects. A major discussion occurred over the allowable width of private roads in relation to parking and emergency vehicle access. Staff will continue fine-tuning the draft and will bring it back for further discussion.

Herriman City received ownership and maintenance responsibilities for Fire Station 103 in late November 2020. The station, located 5916 W Main Street, was built about 40 years ago to house a small volunteer fire department. Additions and remodels have been made to house a full-time fire crew and facilitate additional operations over the years. The UFA Assistant Chief, UFA Herriman City liaison, and the City's Director of Operations all presented at this meeting the current state of the station, which is deteriorating and needs many repairs. The Council indicates they will eventually replace the station with a new one, but want to ensure more livable and safer conditions for firefighters in the meantime. They directed staff to identify the most needed repairs to be done now to get by until a new station can be built, and therefore maximize funds put into repairs and new construction.

In March 2020, as part of efforts to help relieve the community of economic impacts due to the coronavirus pandemic, Herriman City reduced water connection fees, suspended delinquent water account fees, suspended business license renewal fees, and waived most business signage regulations. Now that the pandemic appears near its end, the City will restore the standard water fees, but plans to extend the business license renewal fee waiver for another year.

Herriman City contracts with Salt Lake County for vote by mail elections. The County now offers ranked choice voting for its cities. Ranked choice voting has become popular in some parts of the country and in some municipalities in Utah. It allows voters to rank candidates for elected office rather than choosing a single candidate on their ballot. The Council discussed pros and cons and will revisit the topic at least one more time before making an official decision for this year's municipal elections.

After months of collaboration, the City's general plan consultant has drafted an updated General Plan. Meetings to facilitate community feedback will be held in April at various locations and will include virtual options for each. Then staff will continue to update the plan draft based on feedback from the Council and community.

Herriman City a large portion of its water from Jordan Valley Water Conservancy District. Due to growth and the outdated nature of the contract (signed in 2013), Herriman has exceeded its maximum allotment since 2016 (and steadily increased over that maximum since). Usage above the maximum results in significantly higher rates. The proposed contract approximately doubles the maximum allowable amount. With projected continued growth, the City may again exceed its maximum use as early as 2022. Avoiding higher water rates with this approach would require redoing the contract every year. The City Council opted to follow the recommendation of City staff and contract for this projected amount without overbudgeting and leaving water on the table.