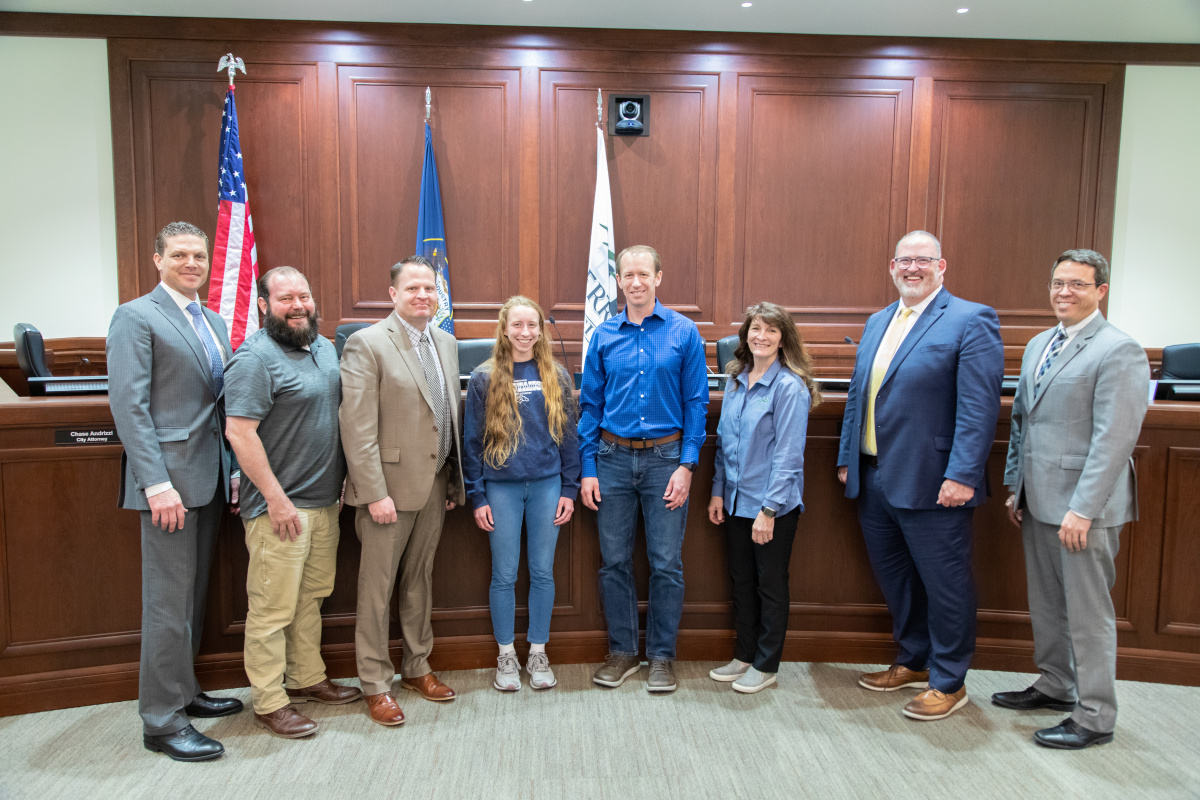 The City Council recognized Addi Bruening of Herriman High School, who was named the 2021-2022 Gatorade Player of the Year in Utah girls cross country running. She was a 6A state champion in both the 3200-meter and 1600 meter races and is the current record holder for the 3200 meter. She also holds a 3.99 GPA and will be on both athletic and academic scholarships at BYU next season.

Leadership from Camp Williams and the Utah National Guard gave an annual report for local military actions as Herriman borders the Camp and is a partner and neighbor with the Utah National Guard. Artillery training—which can be heard in Herriman—will be increasing as time goes on because the United States is introducing new, technologically updated weaponry. The Camp trains the second-most artillery operators in the U.S. outside of Fort Sill (Oklahoma).

The Finance Director presented an initial proposal for the City budget for fiscal years 2022-2023 and 2023-2024. There are some new employees proposed, a few new vehicles, a list of road and water projects, and other items identified by City management as departments needs for the coming years. The Council will provide feedback in coming weeks and a document will become available for public review by early May. The budget must be approved before June 20th.

The Council discussed and approved an updated annexation declaration area map. This map and declaration simply outline areas the City may be interested in annexing in the future. It is not binding for Herriman nor other cities and does not indicate immediate plans.

Councilmember Ohrn, reporting from the Jordan Valley Water Conservancy District, reiterated that Utah remains in a drought and encouraged water conservation. The district’s budget by necessity is being raised due to inflation, which includes Herriman City’s rates increasing by approximately 3%.

Councilmember Hodges, reporting from the City’s Off-Highway Vehicle Committee, noted that the committee is looking at the City's recent OHV study and examining areas that could make sense for off-highway vehicles alongside other trail users.

Councilmember Hodges, reporting from the Healthy Herriman committee, encouraged the public to attend the Pedal Palooza event on May 14th at Crane Park. He also noted that May is mental health awareness month.

Councilmember Shields, reporting from the Herriman Arts Council, noted that auditions for the upcoming summer production, Cinderella, are completed and commended the Arts Council and City staff for the effort. The show will take place in July at Butterfield Park.

Councilmember Shields, reporting from the Association of Municipal Councils, described a recent presentation that showed Utah has the highest percentage of commercial traffic volume of any state. Utah also has the #2 economy in the U.S. and #1 most diversified economy in the U.S.

Councilmember Shields, reporting from the Mosquito Abatement District, noted that forecasts for 2022 expect a high year for the West Nile Virus. He encouraged residents to eliminate areas of standing water, including plant pots.

Mayor Palmer recognized the City’s Human Resources staff for putting on the annual employee appreciation night and commended the Herriman Orchestra for their recent concert.

Captain Anthony Widdison, Herriman City’s liaison from the Unified Fire Authority, presented UFA’s map for 2022 for fireworks-restricted areas. The map is expected to be approved during the next City Council meeting.

The Council discussed the possibility of observing the Juneteenth holiday. The holiday was established as an official federal holiday in 2021 and the state of Utah recognized it in March 2022. 19 of 35 local cities who responded to Herriman City's inquiry noted they are now observing Juneteenth. 2 out of 35 cities are not observing, and the remainder are undecided. The Council agreed that Herriman City would like to observe the holiday, but due to Towne Days being previously scheduled on the holiday this year, the City would officially observe it as a paid holiday beginning in 2023.

The Traffic Committee recently discussed some concerns with City code language surrounding visual obstructions and traffic obstructions. The staff proposed a few changes to clear up ambiguity and vagueness regarding sight lines to allow requirements for safer travel near intersections.

The traffic obstruction concern is current language that can allow vehicles to park along curbs in a way that their wheels can still obstruct travel lanes. However, when cars are parked on both sides of the street, there is a safety and congestion issue. The Council discussed balancing the need for increased safety and enforceability with convenience and not forcing residents to cease parking along the road in front of their homes. The Council will continue to discuss the issue in future meetings.

A recent public commenter requested that the Council consider allowing golf carts on city streets. State statute prohibits golf carts by default but allows them if individual cities wish to do so. The state law exempts golf carts from turn signals, seat belts, and other common street-legalizing measures, so the City cannot mandate those measures. The City can require a minimum age and allowable daytime hours. After a brief discussion, the Council does not wish to make an ordinance allowing golf carts.

A horse trail near 6400 West that the City voted in 2021 to not vacate was discussed again after a public comment in the last meeting requested the item be revisited with the new City Council. The Council will re-address the issue after recent discussions with residents. The revisitation will include a neighborhood public outreach process.