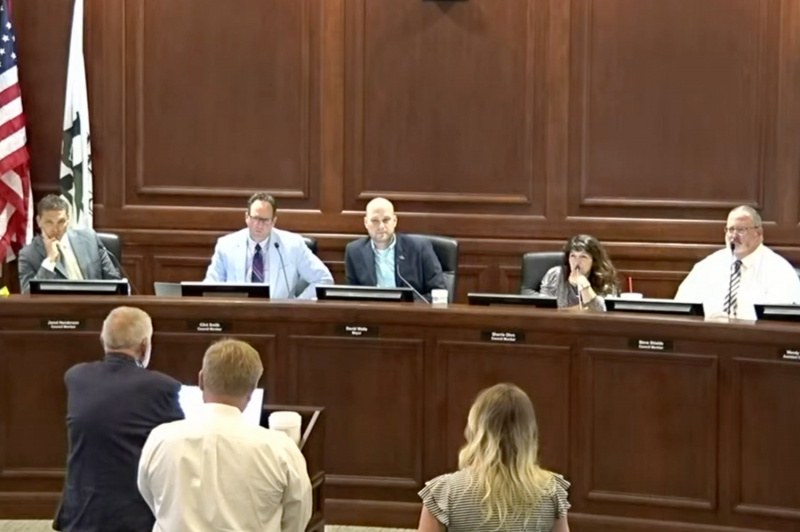 5-0 approving the Consent Agenda, which includes the following:

The Council commended staff for their help and coordination throughout the process of selecting the new city manager.

5-0 closing the public hearing for the 2021-2022 Herriman City budget. However, there will be another public hearing after an edit to the budget in coming weeks. See more below in Property Taxes and the City Budget.

In the presentation, it was noted that much has changed in the three years since 2018. Notably, the Olympia Hills development has been approved and entitled by Salt Lake County. The approved plan is different than the proposed plan studied by Bonneville in 2018, including a significant overall decrease in units, and an increase in acreage reserved for Utah State University and the Jordan School District, more space for office and retail uses, and a proposed trailhead.

They noted that there are existing transportation concerns within Herriman that will need road improvements or expansion with the addition of Olympia Hills.

The consultant noted key conclusions from the updated study, including that Herriman City will have sufficient revenues to construct needed infrastructure improvements and cover ongoing operational expenses. They also believe Herriman City can maintain its high quality of life with enough revenue for additional transportation, recreation, and community gathering spaces. The consultant reviewed and confirmed the existing report by the City's finance director given earlier this year. They concluded that the City cannot afford not to annex Olympia Hills based on the impacts, and that only by annexation can the City have a voice in the development and the revenues needed to mitigate impacts on transportation, public facilities, and public services.

Property Taxes and the City budget

Herriman City departed the Unified Fire Service Area (UFSA) effective January 1, 2021. The UFSA is a taxing entity that collects property taxes, which are then distributed to the Unified Fire Authority (fire department) to pay for services. Going forward, Herriman City will have its own separate taxing entity called the Herriman City Fire Service Area (HCFSA) to collect fire service funds to pay UFA for services. However, the HCFSA will not be officially started until August 2022. Since Herriman City has already left the UFSA, and still needs to pay for fire services, the City is intending on temporarily raising its property tax for one year to pay for fire services. The overall amount of property taxes that residents pay will not change.The same amount that was charged to residents for the UFSA will be added to Herriman City’s property taxes for 2021, and the same amount will then be transitioned to the HCFSA in 2022, whereupon the City intends to reduce its taxes to the previous rate.

Herriman City did not include this property tax adjustment in the 2021-2022 tentative budget as it was awaiting some information from the state of Utah and Salt Lake County. Now that this has been clarified, the City will add the information to the budget document before the next City Council meeting. The City Council will then adopt the new tentative budget and re-open the budget to another public hearing before final adoption.

In a separate topic related to the budget document, the council discussed its ongoing concern with using one-time revenue from building permits to fund ongoing City operations. The concern still exists, but the City has made significant progress in recent years in using one-time money to fund one-time projects, while using ongoing revenue, like sales tax, to fund ongoing operations. This year, the amount of sales tax revenue to the City increased by about 32% over the previous year.

Councilmember Ohrn, reporting from the Wasatch Front Waste and Recycling District Board, noted the upcoming area cleanup program for Herriman in June. More details can be found on WFWRD’s website.

Councilmember Ohrn reported on her attendance at a recent conference for the Utah Water Users Association. She noted there was lots of talk about growth, but that the state and society in general places an emphasis on transportation. It was said that a higher priority of spending should be for water infrastructure, especially with Utah being in a desert state

Councilmember Smith, reporting from the South Valley Sewer District Board, noted a recent completed audit, where the District received clean opinion with no deficiencies noted by the auditor.

Mayor Watts noted a recent meeting with UDOT and City staff concerning initial alignment plans for the U-111 highway. A key concern is with contaminated soils in the area and the costs associated for ongoing cleanup. Construction on the re-alignment is anticipated to start in 2025.

Councilmember Ohrn likewise commended the Herriman City Youth Council specifically for pushing through a difficult year and noted the Council is looking forward to the presentation of their legacy projects.

One public comment was made which commended the City for its upcoming Memorial Day breakfast and ceremony event. It is a longstanding tradition that is meaningful to residents.

The City Attorney noted recent and upcoming meetings for the various working groups assigned to work through various topics regarding Olympia Hills. All available materials regarding the Olympia Hills project can be found at www.herriman.org/olympiahills.

There was a discussion about recording the work group meetings among the Council, City staff and the development team. The matter was also discussed at a previous City Council meeting, but the majority still felt it a better option to not record meetings and that the City's increased level of transparency on the project was sufficient. One reason discussed for not recording the meetings is that if the property is annexed into Herriman City, the existing master development agreement with Salt Lake County is nullified. Because of that, there is a negotiation element to the work group meetings as the developer would likely not want to annex into Herriman City unless their project is still assured to proceed similarly to how it is currently approved. Neither the developer nor the City are required to have the property annexed into City boundaries, and the purpose of these meetings is to explore whether annexation is mutually beneficial. At any time during this process, either party can choose to end the discussions and go their separate ways.

A concern was raised about a possible rushed timeline. The current timeline is based on an annexation by January 1st. It was noted that the City may get into the process and realize it can't hit the timeline with the amount of work that needs to be done, and that the City does not want to rush this process.

It was also discussed that the Council want to have as many eyes as possible on master development agreement (MDA) drafts. The MDA working group is producing drafts as the process goes along and will send drafts to the entire City Council for feedback.

It was noted that the City Council wants to make sure the community realizes the MDA is essentially the final say on how the development will be structured. If the property is annexed into Herriman, that will likely coincide with a master development agreement, and the next few months are the best time for obtaining public feedback.

The Deputy Parks and Recreation Director presented a list of proposed rules and regulations for the K9 Memorial Dog Park, which is nearing its completion. A final list will be published on the City website and at the park upon its completion.

On March 24th, staff received direction from the City Council to re-evaluate repairs and focus on replacing Fire Station 103. Necessary repairs are anticipated to total $20,000, barring any unforeseen issues. The council and staff discussed options for the design of a new fire station to replace station 103. Anticipated costs at this stage are about $6.2 million. That is a rough estimate based on engineering recommendations. A full breakdown of costs will be available as the project gets closer and goes to bid, which could be a few years out.